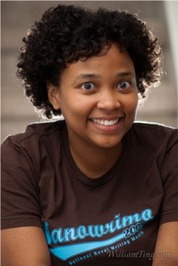 The Prey of Gods (futuristic sci-fi with robots, AI, and an ancient demigoddess; at least one of the narrators is queer and I think most if not all the narrators are POC)

Escaping Exodus (a 2019 release that features a society living inside barely-alive space creatures. Not sure if this one’s queer but it sounds absolutely fascinating.)

Nicky Drayden is a systems analyst, and when she’s not debugging code, she’s detangling plot lines and mixing metaphors. Her debut novel, The Prey of Gods (Harper Voyager), featured in The New York Times Best of New Science Fiction and Fantasy and The Wall Street Journal’s Summer Reading: One Expert, One Book. Drayden’s sophomore novel, Temper, is touted as an exciting blend of Afrofuturism and New Weird. Her travels to South Africa as a college student influenced both of these works, and she enjoys blurring the genre lines between mythology, science fiction, fantasy, horror, and dark humor.

Drayden learned to write novels the old fashioned way, by banging out a crappy draft during the month of November with thousands of other aspiring novelists. In between novels, she frequently dabbles in short fiction, with over 30 stories in publications such as Shimmer, Daily Science Fiction, and Space and Time Magazine.

During her stint as managing editor for The Drabblecast, she helped continue the speculative fiction podcast’s tradition of bringing strange stories to strange listeners. Once a year, she’d escape the slush trenches to work on “Women and Aliens Month” a special series featuring alien stories written by luminaries such as Lauren Beukes, Nnedi Okorafor, and Alaya Dawn Johnson.

Nicky Drayden lives and writes in Austin, Texas where being weird is highly encouraged, if not required. Her novel-length work is represented by Jennifer Jackson at the Donald Maass Literary Agency, and you can find out more about her at nickydrayden.com or catch her on twitter @nickydrayden.

We’ll be giving away one of Nicky’s books next week! Keep an eye on the YarnOwlReads Twitter for updates.

Where to find her on social media

They/She. I’m a queer reviewer and librarian. View all posts by SeeOwlRead